DENVER, CO – Michael Bennet’s presidential campaign was one of the top clients of the Democrat digital fundraising firm Basecamp Strategy, which former staffers describe as an “exploitative money machine” according to a recent report in Business Insider. 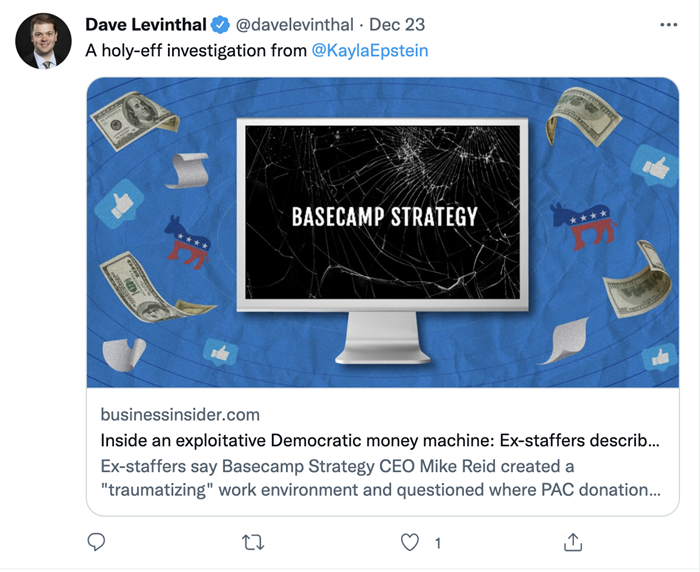 The Insider report says Basecamp’s business model is predicated on high turnover and exploiting young college graduates who “don’t know any better” to relentlessly churn out email fundraising pleas for their clients.

Bennet’s presidential campaign was Basecamp Strategy’s third largest client in the 2020 cycle, according to Open Secrets.

But despite its roster of progressive clients and promises to save America, Basecamp Strategy, based in Washington, DC, was a highly exploitative workplace in which junior employees were pushed to work burnout hours and sometimes fired because they were perceived as disloyal to Reid, 13 former employees told Insider. Three former staffers described aspects of their experiences at Basecamp Strategy as “traumatizing.” Two said the environment was so stressful that it triggered panic attacks.

Other former employees alleged Reid made racist and intimidating comments in the workplace.

In addition to cruel working conditions, the report suggests Basecamp’s top client When Democrats Turn Out PAC exhibited characteristics of a scam-PAC given 60% of its expenditures went to the digital fundraising firm.

“The only reason Michael Bennet spent so much time whining about Mitch McConnell on cable news during his presidential campaign was to fleece unsuspecting donors with the help of this exploitative money machine,” said Compass Colorado Executive Director Kyle Kohli.

“Bennet is every bit as complicit with this firm’s abuses as the scam-PAC Basecamp used to pay themselves.”