The campaign includes social and web ads featuring a new website PartisanGriswold.com where Coloradans can learn about Griswold’s long history of abusing the public trust to advance her partisan interests.

“From soliciting official press release edits from Planned Parenthood to refusing to condemn President Biden after he cast doubt on the legitimacy of the midterms, Griswold has profoundly abused public trust in her office.”

Griswold, who Chairs the Democratic Association of Secretaries of State, told the Washington Post recently the only way to ensure elections remain reliable is for Democrats to prevail in Secretary of State races around the country.

The Washington Post said that argument, along with President Biden contending the midterms could be illegitimate, poisons public trust in election legitimacy:

PartisanGriswold.com also features a petition form where Coloradans can sign up to stay apprised of opportunities to hold Colorado’s “highly political” Secretary of State accountable.

Compass Colorado announced the campaign in an opinion piece published on Campfire Colorado, “a new online news source for Colorado conservatives that will serve as a voice for the People.” 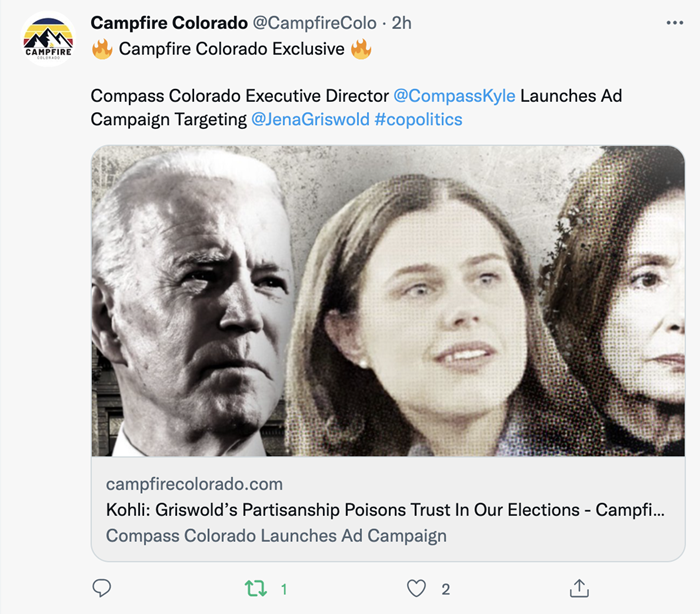 Colorado’s electoral system is built around the premise that voters can trust the Secretary of State to be above politics, and for good reason. The Secretary of State’s office is charged with regulating everything from elections, to campaign finance, to lobbyists in Colorado.

As public discussion around election integrity over the last two years has demonstrated, it is absolutely vital that Coloradans can turn to a trusted voice in the Secretary of State’s office with confidence that the individual occupying that seat is not simply using the office as a platform to advance a partisan agenda.

Unfortunately, that is not where Colorado finds itself with Secretary of State Jena Griswold.