DENVER, CO – Polis donor and top DIA lawyer Scott McCoy is in hot water after accusations surfaced that he “violently slapped” a subordinate at a holiday party earlier this month.

According to source reports, the incident took place at a holiday party for DIA’s top executives at a hotel near the airport. Alcohol was being served. A group of DIA leaders, including airport CEO Phil Washington, his Chief of Staff Cristal DeHerrera, airport attorney Everett Martinez and several others, were sitting together at a table when they were joined by McCoy.

The group was discussing police de-escalation tactics said one source, when McCoy apparently decided to demonstrate, jumped up and violently slapped Martinez in the face multiple times and yelled commands at him, nearly knocking Martinez out of his chair. 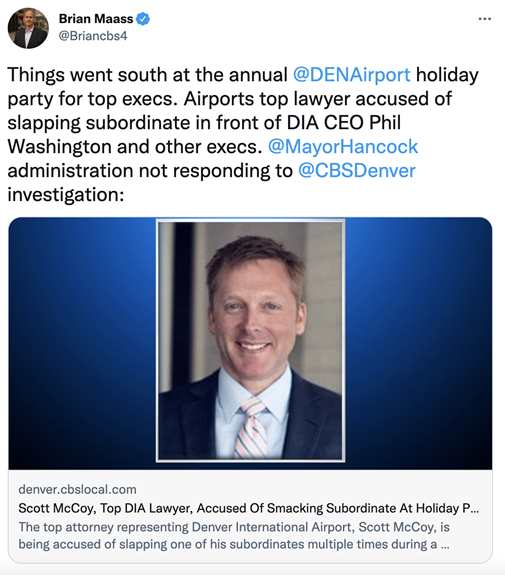 Records show McCoy has contributed to both Governor Polis’s campaign and the Colorado Democratic Party.

According to CBS Denver an executive order signed by Mayor Hancock in 2018 could subject McCoy to repercussions, including termination. Hancock reportedly has not responded to questions from the press.

McCoy’s alleged misconduct comes as airport officials are asking the Denver City Council to authorize another $1.1 billion to finish DIA renovations, which would push completion to 2028 and more than double the original cost estimate.

As the top lawyer for Denver International Airport, McCoy is deeply involved in the project. He oversees “a team of 18 attorneys and legal professionals within the City Attorney’s Office, responsible for DIA’s real estate transactions, contracts, bond financing, legal claims and law compliance.”

McCoy joined DIA leadership a few months prior to CEO Phil Washington, who resigned from Los Angeles Metro leadership after being connected to public corruption allegations.

“As it turns out, wasting another $1.1 billion on airport renovations is not the most embarrassing headline associated with DIA this year,” said Compass Colorado Executive Director Kyle Kohli.

“The fact McCoy violently smacked a subordinate without repercussions shows once again there is a severe lack of accountability at DIA.”