Will Jena Griswold condemn Biden for casting doubt on legitimacy of upcoming midterms?

DENVER, CO – Colorado Secretary of State Jena Griswold has built her career on condemning anyone who casts doubt on the legitimacy of American elections.

However, today President Biden said the legitimacy of America’s upcoming midterms hinges on whether Congress passes a series of partisan voting bills that would effectively federalize American elections.

PHIL WEGMANN, REALCLEARPOLITICS: A moment ago you were asked whether or not you believed that we would have free and fair elections in 2022 if some of the legislatures reformed their voting protocols. You said that it depends. Do you — do you think that in any way it would be illegitimate?

PRESIDENT JOE BIDEN: Oh, yeah I think easily it could be illegitimate. Imagine, imagine if, in fact, Trump had succeeded in convincing Mike Pence to not count the votes. Imagine if —

WEGMANN: In regards to 2022, sir. The midterm elections.

BIDEN: Oh, 2022. I mean — imagine if those attempts to say that the count was not legit. You have to recount it and we’re not going to count, we’re going to discard the following votes.

I mean sure, but I’m not saying it is going to be legit. The increase and the prospect of being illegitimate is in a direct proportion to us not being able to get these reforms passed. [emphasis added] 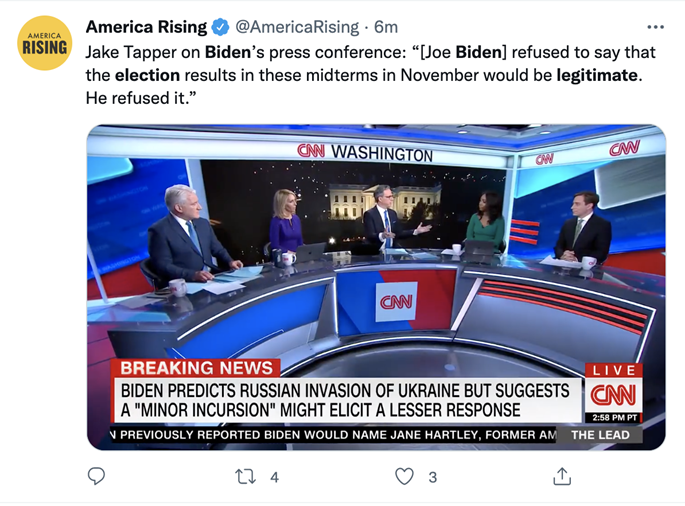 If you are covering President Biden’s comments, please consider the following quote from Compass Colorado.

“Now that President Biden has cast doubt about the legitimacy of the midterms, will Griswold condemn the President for undermining confidence in our democracy?”